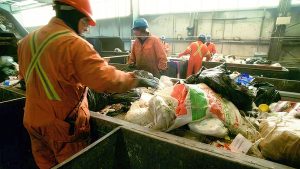 The Halifax-Waste Resource Society is appealing the March 22 provincial decision that will allow Otter Lake Landfill to operate without its long-time protections against odour, litter, hazardous waste and infestations of rodents and scavenger birds.

The appeal will be made to Tim Halman, the Nova Scotia Minister of Environment and Climate Change.

Should any aggrieved individual or organization also wish to appeal the decision, the pdf appeal form can be downloaded here: https://novascotia.ca/nse/dept/docs/Notice-of-Appeal-Form.pdf. A $108.95 fee is required to accompany a completed form. The deadline to lodge an appeal on this matter is April 21.

The administrative-level decision of March 22 sets forth the conditions that will permit Halifax Regional Municipality, the owner of the landfill, and Mirror Nova Scotia Ltd., the operator, to deactivate the front-end processor and waste stabilization facility.

The front-end processor opens and inspects all residential garbage arriving at the landfill and removes decaying organic matter, hazardous waste and recyclables such as plastics and paper. The waste stabilization facility takes the retrieved organic matter and renders it inert before it is buried with other waste at the landfill. Decaying, unprocessed organic matter is known to attract rodent and scavenger bird populations and to cause noxious odours at landfills.

The CMC, established by the HWRS and HRM, does community monitoring of the landfill’s operations.

Halifax Waste Resource Society decides to Appeal to the Minister of the DOECC his department’s decision on the HRM Application of August, 2022

A letter to Mayor Mike Savage

The HRM Report proposing the removal of the FEP & WSF

The HRM Report proposing the removal of the FEP & WSF (Jan. 21,2021) – and which both CMC and HWRS responds to as provided above. Click here to view the report.

What is your recycling personality?

Try our fun and interactive quiz!